The Chef Sessions No. 1 with Tyson Cole

Tyson Cole co-founded Uchi in 2003 as the restaurant’s Executive Chef. Before Uchi, he was a passionate student of the Japanese sushi tradition, training for more than 10 years in a variety of roles from dishwasher to head sushi chef in Tokyo, New York, and Austin, under two different sushi masters. Formative years were spent at Musashino, one of Austin’s top sushi restaurants, where he completed an intensive traditional apprenticeship under owner Takehiko Fuse. The two spent time in Japan, where Tyson experienced the food and gained technical skill. Fuse challenged him to learn the Japanese language, which helped Tyson learn more about the cuisine. He later trained at Bond Street, one of the busiest sushi restaurants in New York City. After Uchi opened in 2003, Tyson was recognized as one of Food and Wine Magazine’s Best New Chefs of 2005. In 2010, he opened Uchiko and in 2011, he celebrated the release of the Uchi Cookbook. Later that year, Tyson also received a James Beard Foundation Award for Best Chef: Southwest.

I’ve taken numerous friends to Uchi over the years and we are all always overjoyed with surprise and delight.

Below are some of my favorite standard dishes you can find at Uchi! 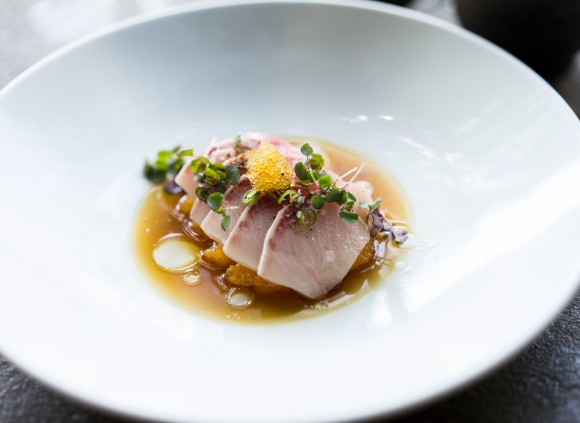 Chef Tyson Cole joins us in this first episode of The Chef Sessions for Let The Music Play Podcast as we discuss his culinary story, what keeps him curious, the culture of Uchi, and his hope for their customers.

You can stream or download this episode and all other episodes of Let The Music Play Podcast in iTunes or at AshtonGustafson.com.

One thought on “The Chef Sessions No. 1 with Tyson Cole”

I would love to hear your feedback. Cancel reply